Sorry it’s been awhile; upon arrival to Surabaya and after about 3 days of travel, I discovered I had left my computer charger in America. Let’s begin with a quick recap of the past few weeks. I, along with 46 other excited and nervous PCV’s to be, arrived in Indonesia on April 4th. Jetlagged and sleep deprived, we were greeted by the Peace Corps staff and a handful of current volunteers. We spent the next few days confined to our hotel, familiarizing ourselves with Peace Corps’ lists of do’s, don’ts, and do’s but we really don’t want you to’s, all-the-while cramming in as much language as possible into our anxious minds before heading off to our Pre-Service Training (PST) homestay villages.

Speaking of that, Welcome to Batu!

Living in a small village located in the hills above Batu, surrounded by mountains, volcanoes, and too many apple orchards to count; teeming with friendly neighbors, it’s hard to keep a smile off your face as you walk around and are repeatedly greeted with a “Mau ke mana?” (Where do you want go?). 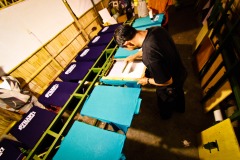 While most  find their living in some sort of farming, my bapak (father) Suntari works for the local government as well as running his own printing business out of his rumah (house). He’s got a great little studio set up out back fully equipped for any printing you could imagine as well as some space to practice his Taekwondo; my bapak is seriously bad ass. Maryam, my ibu (mother), cooks some of the most ENAK (delicious) food I’ve ever tasted – and trust me I’ve tasted plenty of it as Indonesians are keen on keeping you full. I probably shouldn’t even start on the food here, it deserves a page of its own, but I am pretty sure tempe manis is my new favorite food.

My adik prempuan (little sister) Fenia is 11 years old and a little shy. We spend most of our time together watching Sponge Bob Square Pants before school and after dinner. I usually attempt to work Sponge Bob into any conversation I have with anyone under the age of 18 – Bikini Bottom is the bridge to my cultural gap. Right next door you can find my nenek tua (great grandmother) Asminayah and kekek tua (great grandfather) Supriati. They find me very amusing and a good source of entertainment, especially when I attempt any daily household task.

I usually wake up early and go on a run with my bapak around 5am, exploring neighboring villages by sunrise and watching the smoke bellow from the volcanoes on the horizon

I cool down from my run with a nice mandi (Indonesian bathing); and when I say cool I mean cool! Nothing wakes you up for the day like pouring scoops of ice cold water down your back… 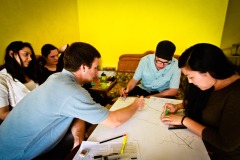 Language class starts at 8am at the Pendopo, about a five minute walk from my house. By far the best classroom I’ve ever had, it’s open air with spectacular views of the hillside. As the 47 volunteers were divided up into 8 different villages; there are only five other trainees in my class, which makes for a great atmosphere for language acquisition. Language class with our Guru (teacher – you can figure that one out) Totok runs until 3pm, with an hour and a half break for lunch around noon. Once released from language study, we spend two hours with our cultural facilitator Mas (Mr.) Dimas, who answers any questions we might have about Indonesia – despite how ridiculous they may be.

Dinner and more Sponge Bob with Fenia is usally around 6:30pm, and most nights I can’t stay up past 9 or 10. I spend any spare time I might have going on jalans (walks) around the village, visiting other host families, playing guitar with my family, and occasionally teaching English to a rambunctious group of anak anak (children). Then I wake up and do it all again 🙂

View from the top of my village